Hope everyone had a wonderful Christmas and you are getting ready to bring in the new year!  Mr. Wishes and I are throwing our first New Year’s Eve bash and making it a double whammy by celebrating my 30th birthday that night with our friends, as well.  We just hosted Christmas dinner so haven’t had much time to plan, but are hoping to throw a pretty sweet party.  I have some surprises up my sleeves for our guests 🙂

I had been wanting to make some sort of nut butter at home for a long time now.  I don’t know if I ever mentioned this before, but I won a Breville food processor a couple of months ago on one of Brown Eyed Baker’s giveaways.  This baby retails at 400 dollars in the stores!  I was so excited because a food processor is something I’ve wanted and needed for a long time now.  There are just certain things you really can’t make without one and this one has an 11 cup capacity and a powerful motor so the possibilities are endless.  It’s amazing! I highly recommend it.  I use it several times a week and now wonder what I ever did without it.  It opened up a whole new world for me.

I decided to make almond butter and it turned out awesome. It had a slight sweetness from the maple taste, but just the right amount of sweet. I think the maple was a great addition.  This stuff costs around 10 dollars to buy at the store which I could never justify, so now I can make it at home with very minimal time and effort. Also, let’s face it: homemade tastes 29493567 times better than store bought!  Making it at home would be a good idea, especially if you plow through a lot of this stuff.  I found myself mostly just eating it with a spoon because it was so good all by itself, but this would be great spread on toast, crackers or on a sandwich.  You can also use it as a substitution in any recipe calling for peanut butter.

I recommend using a large food processor (9-11 cups maybe?) so you have an easier time getting it creamy and smaller ones will have a hard time processing the almonds.  While almond butter can be made from raw nuts, roasting the nuts just prior to making the butter considerably enhances both flavor and aroma.  Also, it does take some time for it to turn into a creamy consistency while processing – just be patient!  It will happen 🙂  As the oils are released from the almonds, they’ll start to stick together and form a large mass that moves around the bowl.  Here is this video to help you if you need step-by-step photos to help you out.  http://bowlofplenty.blogspot.com/2009/03/homemade-almond-butter.html 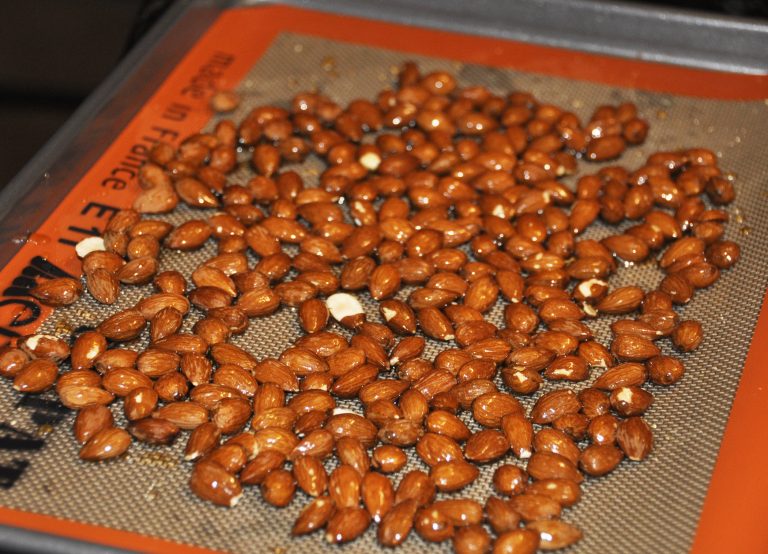 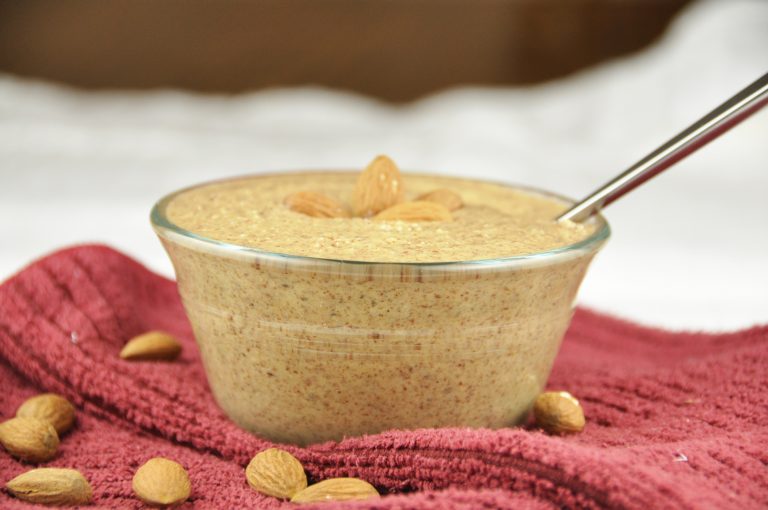 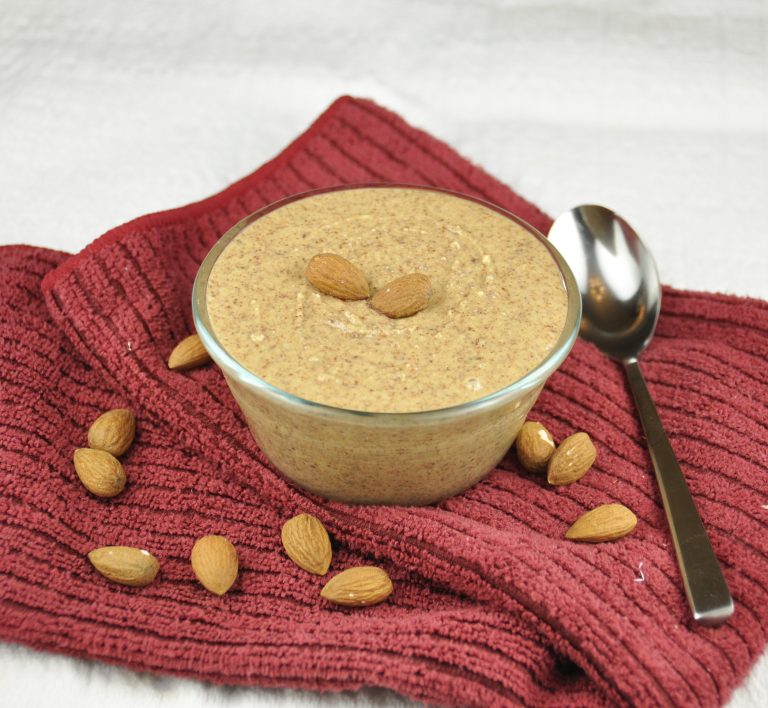 Preheat oven to 325 F. Line a rimmed baking sheet with a silpat or parchment paper.

Spread the almonds on the prepared baking sheet then drizzle with the maple syrup. Toss to coat evenly. Roast for 20 minutes, stirring the almonds at least once halfway through. Remove the baking sheet from the oven and allow the almonds to cool for at least 10 minutes.

Transfer the cooled almonds to the bowl of your food processor. Add the salt. Begin processing to break up the nuts. Add a drizzle of the oil and process for about 30 seconds, then stop the machine and scrape down the sides. Repeat until your almond butter reaches its desired consistency – it may take a while (mine was nearly 7 minutes), so don’t be concerned if it’s slow-going. The amount of oil you’ll need will depend on the moisture content of your almonds, and your desired consistency.

Store in an airtight container in the refrigerator. 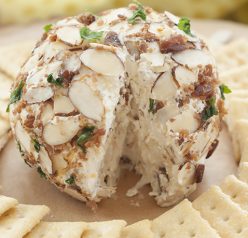 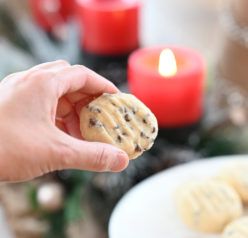 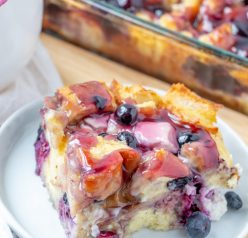