A (Groundhog) Day in the life…

It seriously took me about a week to fully recover from Groundhog Day weekend (said no one, besides me,…. ever……)

On February 2nd, Mr. Wishes and I made the trek to see Punxsutawney Phil (the Seer of Seers, Prognosticator of Prognosticators) for Groundhog day.  It was a dream come true for me seeing as I had been wanting to go to Punxsutawney, Pennsylvania for the big day since I was 10 years old.  Our plans to go were looking grim as there was a lot of snow in our forecast, as much as 2 feet in some areas we would be driving through.  We kept an eye on the weather, left 12 hours later than we planned, and went a different route (through the Allegheny mountains instead of the thruway), but we made it happen!  Mr. Wishes was truly my Groundhog hero that day, doing everything in his power not to cancel the trip and see the look of disappointment on my face 🙂 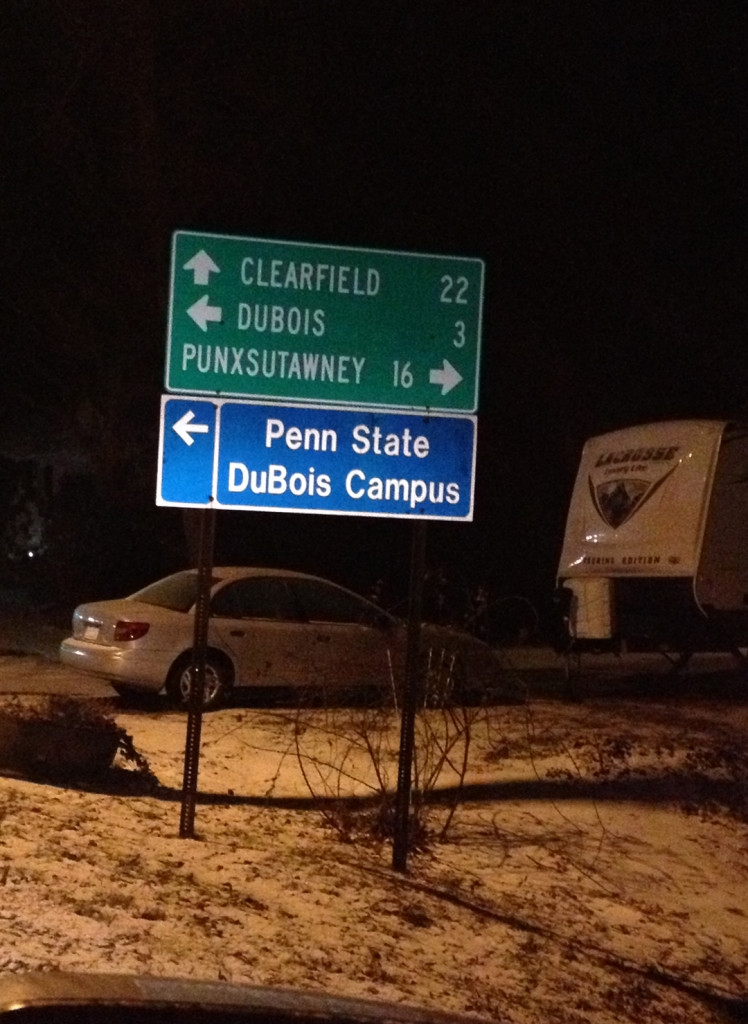 We left promptly at midnight (who needs sleep?!) and drove straight through the night and arrived just before 4 a.m at the Walmart in Punxsutawney where we were parking our car.  I was really there for Groundhog Day!!! 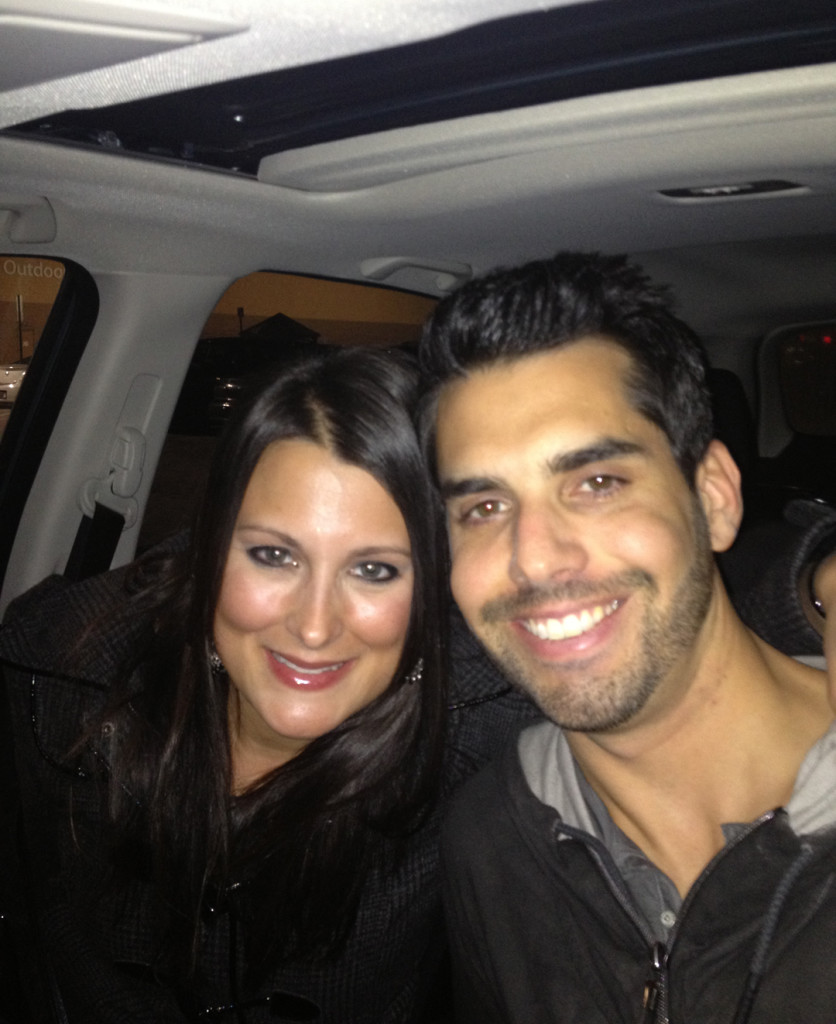 We went inside Walmart and bought some hand warmers which ended up being a true lifesaver for us later on.  We then bought our “tickets to ride”….the shuttle bus tickets to take us up to Gobbler’s Knob.  It was about 2 miles up hill from where we parked.  Some crazies walk it, but it turned out to be the warmest 10 minutes we were going to have all morning so we took advantage of that and rode the bus!  Side note:  students in Punxsutawney and the nearby city, Altoona, get 2 days off of school for this holiday!  They use their buses to transport everyone to Gobbler’s Knob.  I mean I always thought Groundhog Day should be a Federal holiday anyway, just sayin’… 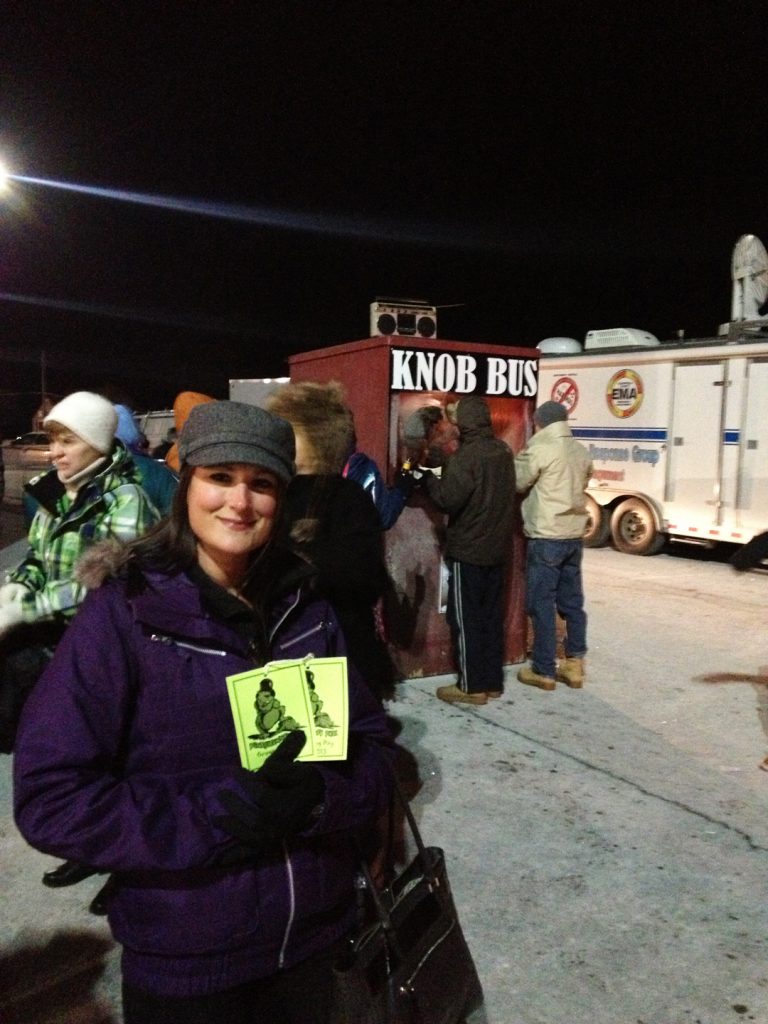 I’ve got 2 tickets to paradise!

We arrived at Gobbler’s Knob promptly at 5 a.m. and WOW was it cold!  We took some pictures at different spots…I even got a picture with Punxsutawney Phil’s “Protector” and member of the “Inner Circle”, who just happened to be walking in ahead of us. 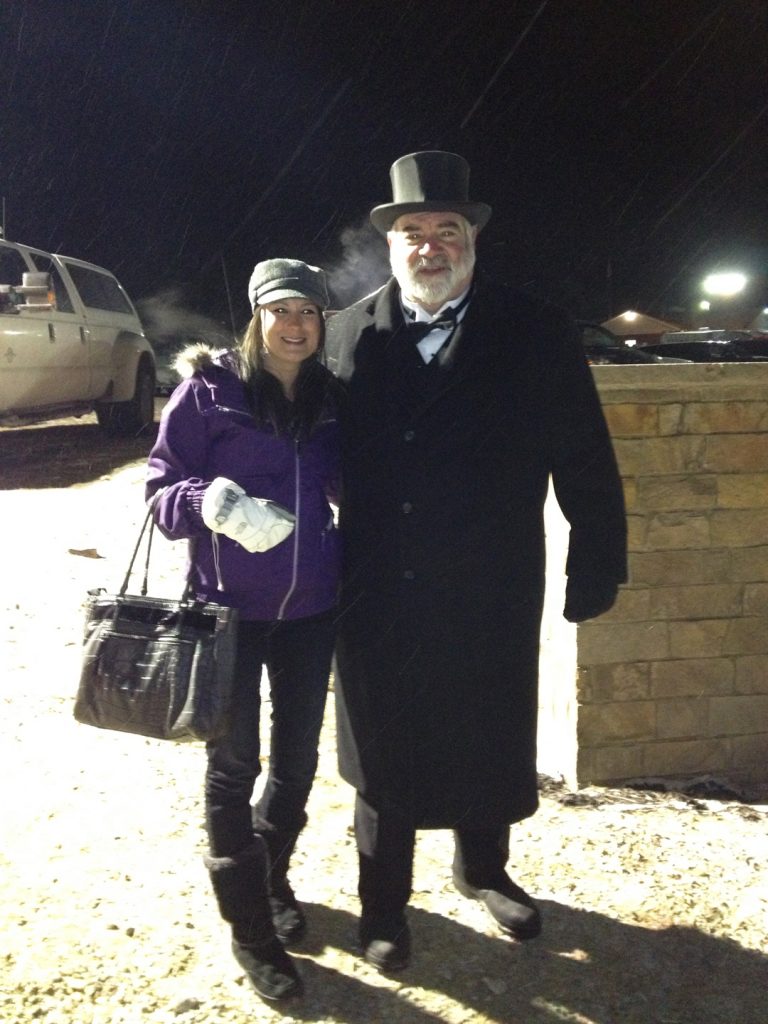 We then spent time trying to get warm by the fire but wanted to go get our spot in front of the stage before we ended up too far back.  Believe it or not, the low temperature for the evening reported over the loudspeaker was 1 degree above zero. One degree!! And according to reports from the various weather stations there, it felt many degrees colder, with the “feels like” temperature reaching negative double digits.  Glad I didn’t know that then!  We were just in pure survival mode trying to stay as warm as we could as we still had 2.5 hours to kill before the Groundhog made his appearance.  That can seem like a long time in those kinds of temperatures.  Because of this, I think it’s safe to bet that most in attendance were also hoping to not wake up to the same occurrence on Sunday as would have been the case in the movie Groundhog Day 🙂 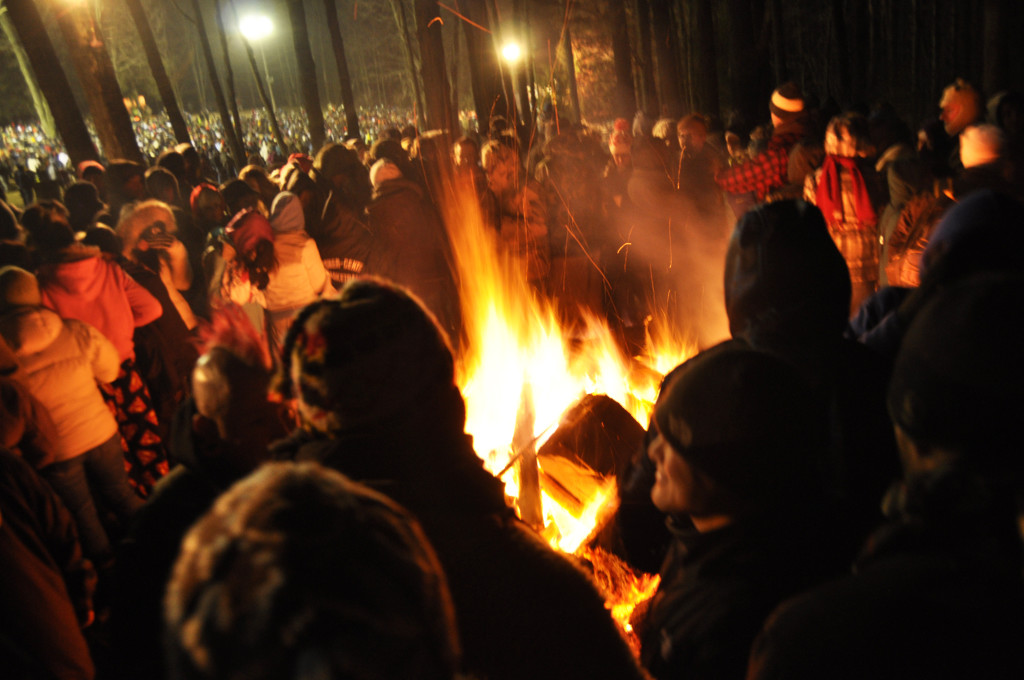 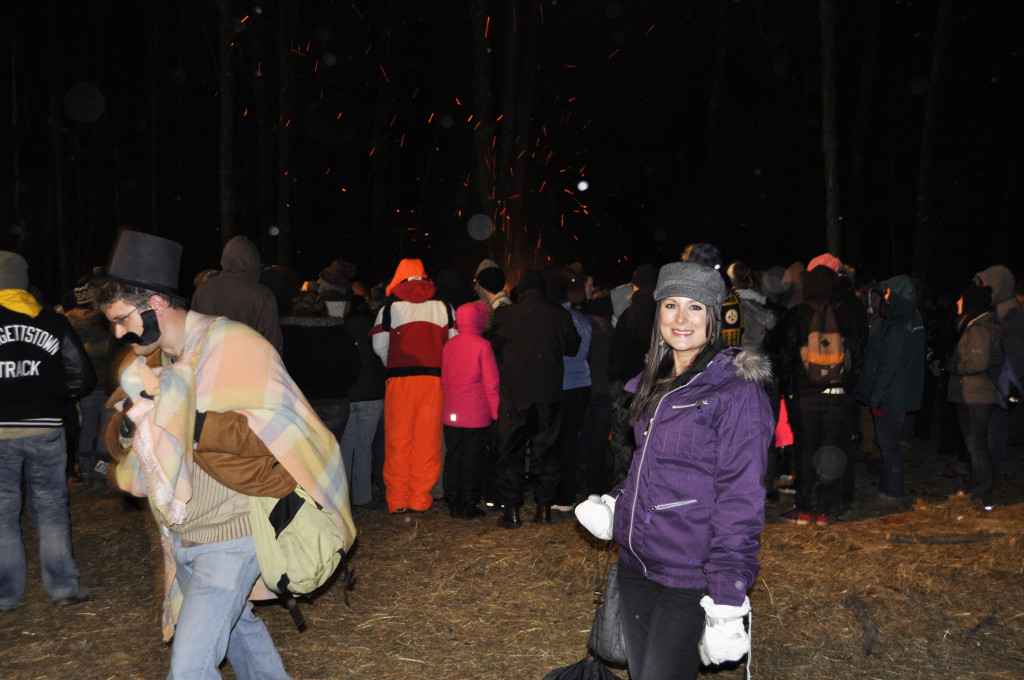 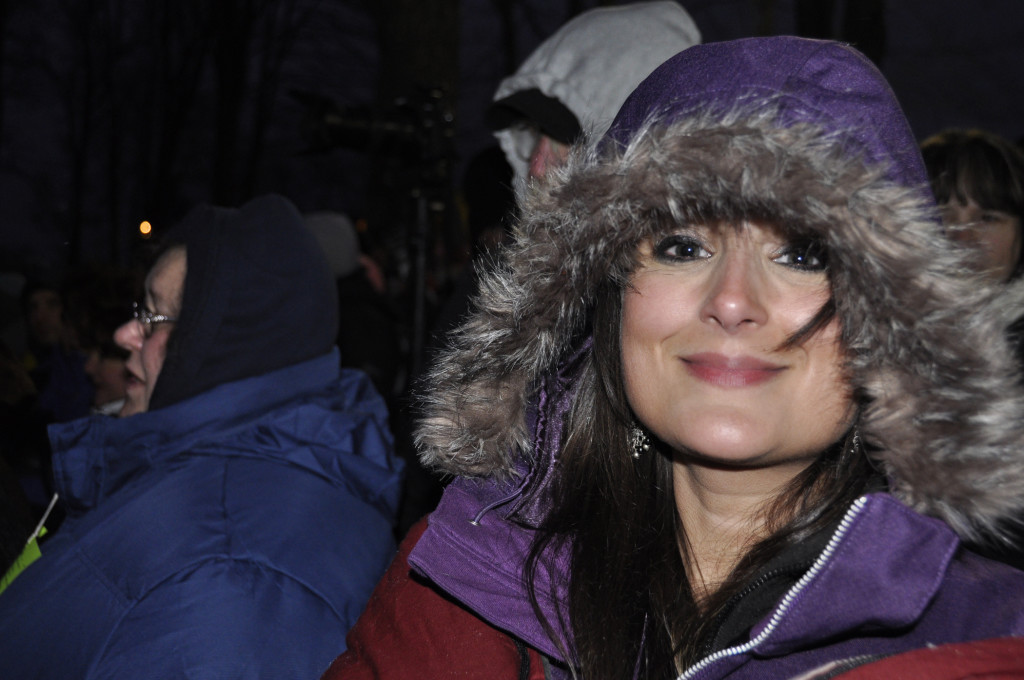 Quite appropriately, the weather was the topic of conversation overheard the most at this year’s Groundhog Day celebration, and just as the weather man predicted, snow begins to fall at The Knob around 5:30 a.m.  The pre-Phil entertainment featured several dancers from the local high school, and three members of the inner circle who danced around in anticipation of Phil’s forecast.  Then, right at 6:30, the lights go down at Gobbler’s Knob and the crowd is treated to a beautiful fireworks show. The show goes on for quite some time, with a grand finale that was definitely worthy of the round of applause it received.  I was very impressed. 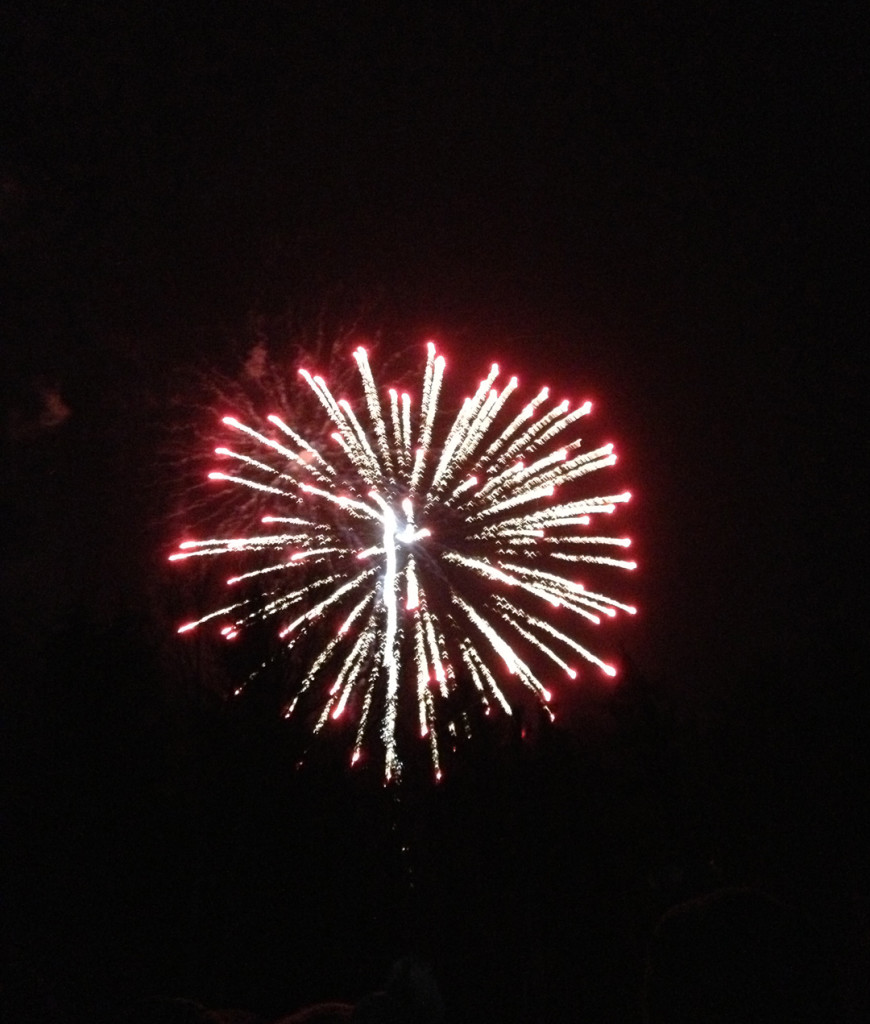 Then, at 7:25 a.m., it was time for Phil’s weather prediction. Legend has it that if the furry rodent sees his shadow, winter will last six more weeks.  But if he doesn’t see his shadow, spring will come early. The prediction is made during this ceremony overseen by a group called the Inner Circle. Members don top hats and tuxedos for the ceremony each year. Bill Deeley, president of the Inner Circle, says that after “consulting” with Phil, he makes the call in deciphering what Punxsutawney Phil has to say about the weather.  Two handlers knocked on the stump, and pulled Phil out, holding him in the air for all to see. They then placed him on top of the stump platform and gathered around. After some tension filled seconds, a verdict was reached.  Phil did not see his shadow = early Spring! 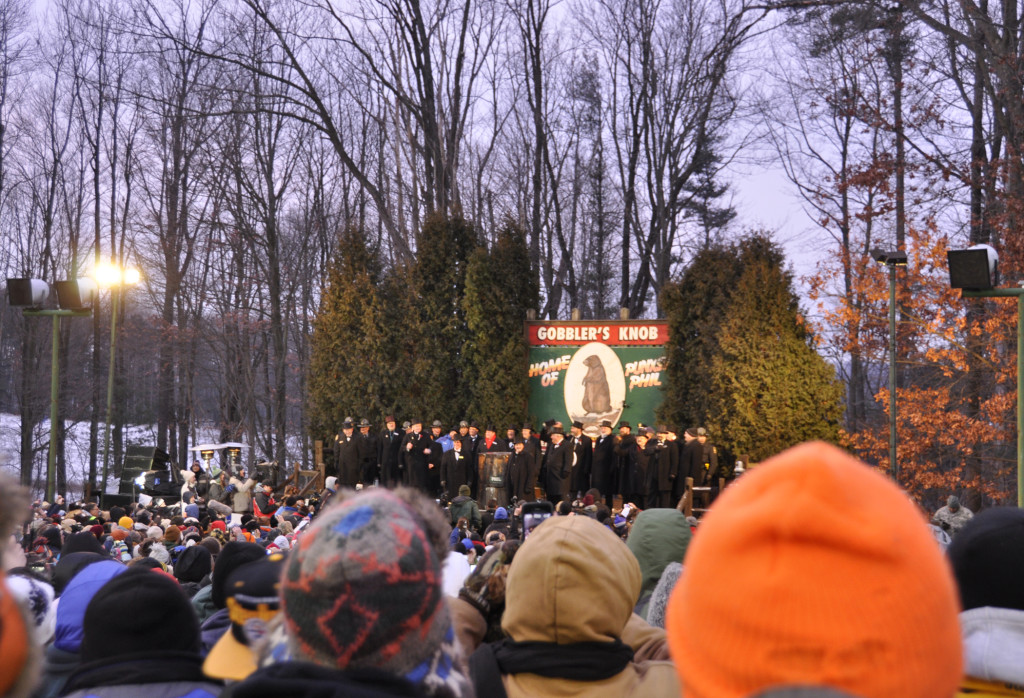 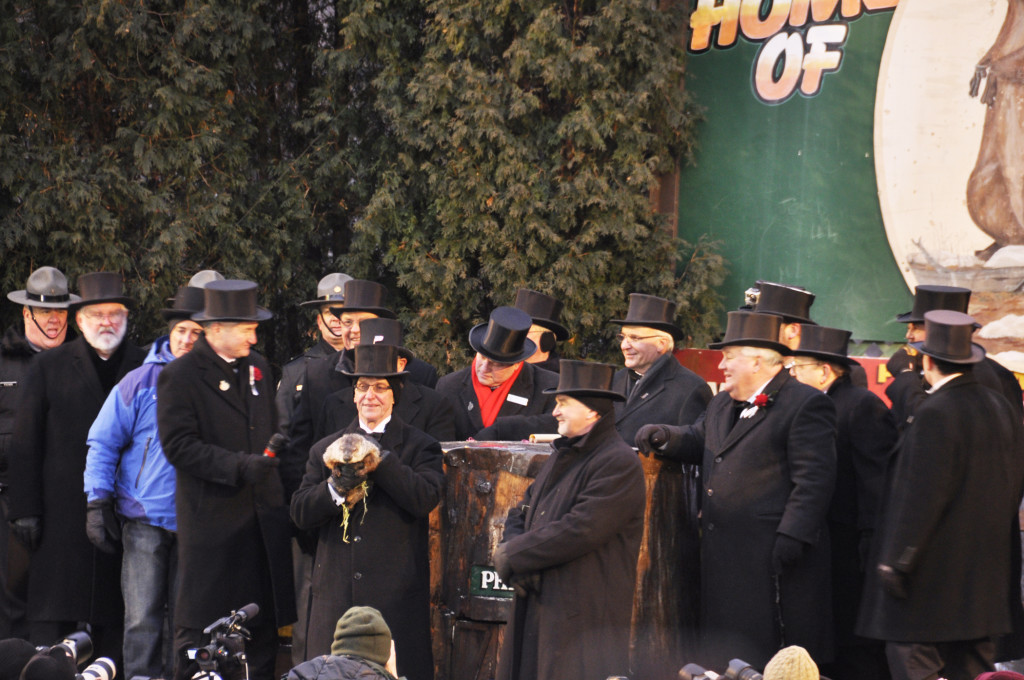 I have to say, with the bitingly cold, frigid temperatures, an early spring was the last thing myself and the other 30,000-plus people packed in with us at Gobbler’s Knob could have imagined.  Also, according to the data Phil predicts an “early spring” only 13% of the time.  It was only the 17th time in the past 127 years that he didn’t see his shadow.  We were lucky, I guess!

Afterwards, there was an opportunity to go down to the stage and have pictures taken with Phil and the inner circle, but it was freezing so we left to get in the large line of people waiting to board a bus to take us back to our cars.  We got back to our car around 8:30 a.m and blasted the heat to try and warm up.  I honestly felt like my body would never get warm, but it finally happened!  We drove down the street into the town and found a small diner to have breakfast.

There’s not much to downtown Punxsutawney, which is a small town about 80 miles northeast of Pittsburgh.  In the town, however, there are Groundhogs everywhere.  Literally everywhere.  There are thirty of them hidden all around the town.  The cold temperatures kept me from finding all 30 but I did see 3 or 4 and even posed with one on the street. 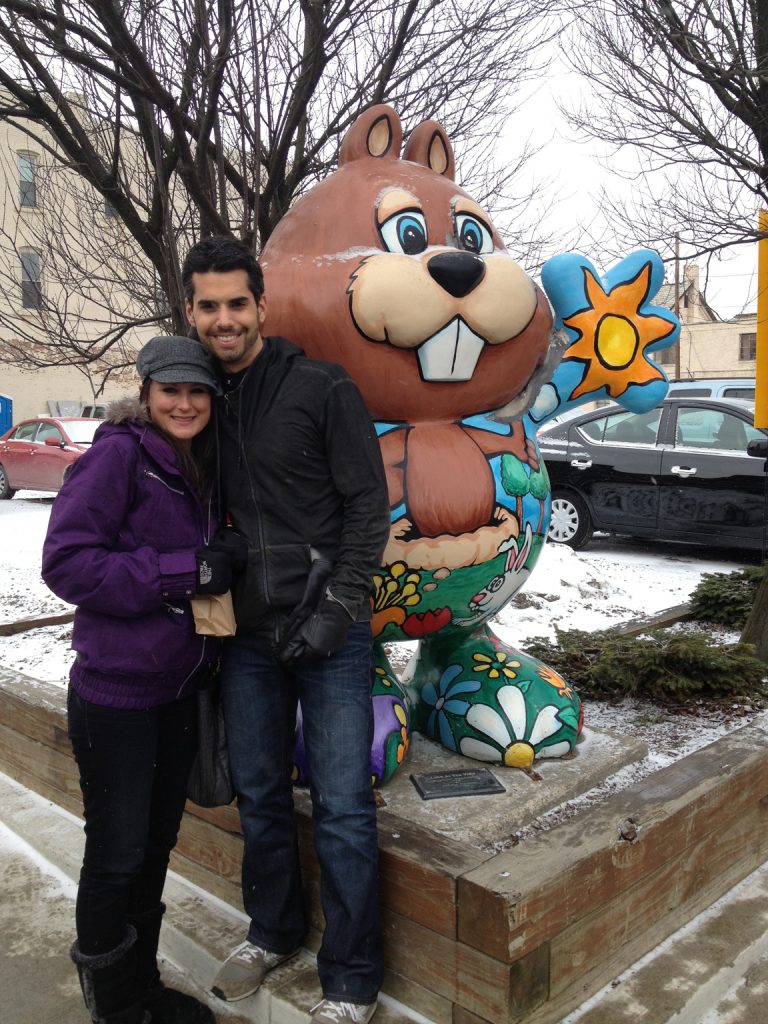 Strolling around the town…

We also visited some cute little Groundhog souvenir shops and I got this adorable little ornament. 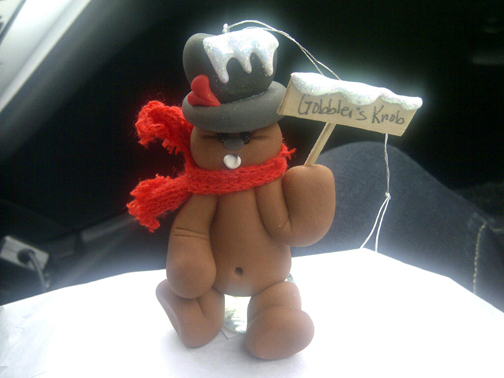 It was one of the most memorable weekends I’ve ever had and a once in a lifetime experience!  I owe it all to Mr. Wishes.  Dreams do come true 🙂  Here’s to hoping some nice, warm weather is coming our way soon… 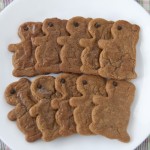 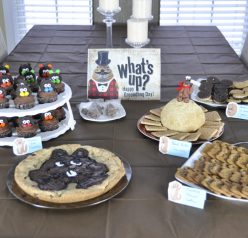 How to Throw a Groundhog Day Party